The essence of Lead Nurturing

Going through a few old photos I ran into this picture I took of a street bench in San Diego and I realized it really captured the essence of Lead Nurturing. Anyone in sales or marketing knows the feeling of exasperation when it comes to finding the right prospects, getting them interested, qualifying and then eventually closing a deal. It’s hard work. Keeping in touch without bugging people. Informing, inviting. And ultimately being there, being top of mind when they need you. And this picture really captures it: your prospect needs to know you when they need you. Writing this blog post of course I couldn’t resist Googling  Stahlman Bail bonds. Turns out that George “King” Stahlman died in 2009. Here’s the essence from the obituary in the UT-San Diego:

Stahlman, 85, was known for his gregarious personality and propensity for self-promotion in a highly competitive business. He is widely recognizable from his television, radio and print advertising, many of which featured the jingle: “It’s better to know me and not need me than to need me and not know me.” 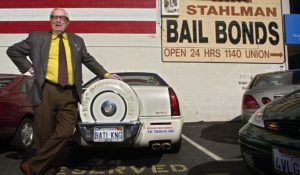 According to his family, Stahlman’s longtime motto was: “Early to bed, early to rise, work like hell and advertise.”

Amen to that! Lead nurturing takes a lot of time and patience. But it’s the only way to make sure they know you when they need you! So keep it up:

We’d love to help you with your lead nurturing!