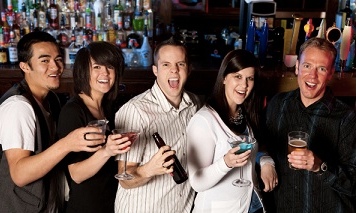 Every marketer knows that the most coveted and trustworthy form of persuasion is word of mouth.  That’s why Yelp, Angie’s List, and TripAdvisor are so popular.  In an environment of ever increasing noise and highly targeted ads, word of mouth maintains its position as king of the mountain in terms of effective marketing.

A recent study by Nielsen asked consumers what marketing approach they found the most trustworthy.  When plotted on a graph, the continuum becomes clear:

Earned media is the most trustworthy form of marketing that can be acquired in a modest timeframe with a typical budget.  Only online consumer opinions and word of mouth are trusted more, both of which require significant time, scale and/or resources to achieve.

There are all kinds of statistics that prove the worth of word of mouth marketing, but it all boils down to rudimentary human psychology based in trust.  This is something that I call the “gay bar theory.”

Back in my single days, I learned a valuable lesson:  I met more women to go out with by hanging out with my gay friends at gay bars than at traditional bars and clubs.  It’s true.  The reason is because people tend to have defensive walls raised high when encountering the opposite sex at traditional meeting places.  It’s really hard to break down those walls and prove that you’re a nice and normal person.

However, when women are with their gay male friends at gay bars, those walls are lowered and they become instantly approachable. Men at gay bars don’t seem like threats because, well, they’re gay.  They don’t want anything.  So I was able to meet and date a lot of great women who mostly assumed I was gay when I approached them.  By the time they learned I wasn’t, I had already gotten through their defenses and proved that I wasn’t a sleaze.

The same thing is true in marketing.  Faced with an advertisement, consumers have their defenses in high gear; they know the goal is to sell them something.  But earned media, in the form of news articles, reviews, and social media shares, is able to more swiftly penetrate those walls because the perception is that those messages have no sales motive. Think of it this way:  Trust exists on a continuum, with paid advertising on the least trustworthy end and word of mouth the most trustworthy.

For a fee, smart public relations professionals can work hard to make sure that worthy brands receive the earned media and third party validation that they deserve, generally within several weeks or months.  A message presented through the lens of an unbiased journalist or satisfied customer carries much more weight than advertising by breaking through customer defenses.

This isn’t to say that there is no room for advertising in the marketing mix.  On the contrary, advertising works on several levels, most notably building brand awareness quickly.  Earned media, though, is more effective at building trust and cultivating the long-term brand equity most valued by brands.  Just like a straight man in a gay bar.

Interested in building brand equity through blazingly brilliant b2b editorial outreach? Talk to me or one of my pals at Write2Market today. We’d love to talk about hooking you up!