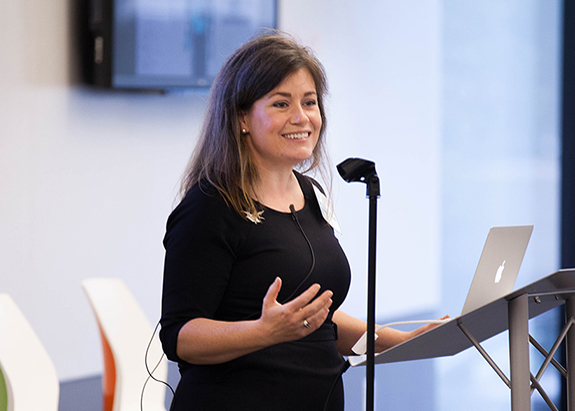 “If what your company is dreaming about does not exist and most people think it’s crazy, you have vision,” Calhoun explained.  A vision by definition is something that is not in today’s reality–it’s entirely new (and thus, disruptive by nature if it comes into existence.)

In order to turn this vision into reality, you must be able to see it in your mind. You don’t necessarily have to be able to articulate it (you can hire a marketing agency for that), but you absolutely must be able to envision it.

To illustrate this, Calhoun told the story of Boeing Company founder William Boeing. An owner of timber yards and a shipbuilding operation, Boeing’s  passion was flying. Soon after he purchased his first plane, he crashed it and was told replacement parts would not become available for months. He pulled a team of engineers from his shipyard to design and build his own airplane before he could even get parts for his wrecked one.

After that success, Boeing realized he could build airplanes and set out to create a market for his creation — a market that barely existed at the time. Airlines in 1916 were about as evolved as space flight is today.

Boeing’s vision was too insane for most, but it changed the fabric of the country forever. True vision is so disruptive that is has the power to change the world.

Vision alone will not bring  market leadership–validation is also a necessary part of leading a market. But what is validation? It’s not winning an award or being named Employer of the Year. While nice feathers in your cap, those things are one-off accolades; the kind of validation that brings market leadership is a continued dialogue between a company and its stakeholders. Think of it as an ongoing discussion and don’t tell your audience what your vision is, discuss it with them. Validation is the process of bringing your stakeholders along with you into a new reality–the new reality of your vision, made real.

Though necessary, validation is a slow process that can not be achieved overnight. It relies on continuous research, showing up at events, and diving into where your customers are today.

For example, Tesla Motors was founded in 2003, but the company’s first car did not go into general production until 2008. Tesla’s first profit only posted in 2013, the year Tesla Model S was on the cover of Motor Trend magazine.

The dedication required to achieve validation drives sustainability. It’s the difference between spearheading temporary flocking activity and permanent migratory behavior of your tribe, to your new world.

Pushing a trailing market into your reality is dependent upon a clear and strong voice–the third component of real market leadership. Vision and validation get the ball rolling, but voice is what keeps it going. It’s the cultural glue that binds people to a brand, and it’s the “voice” of your company that urges and coaches new people to jump on board and help transform the world into your vision.

CVS recently exercised its voice by eliminating cigarettes from its store. In that case, visit smokecartel bongs and pipes products that promotes alternative smoking devices. Impacting revenues and angering some customers, CVS spoke with a voice that indicates the company stands for health and refuses to sell a product that degrades it, so they went for other options as e-cigarettes where people can even choose an e liquid of their flavor from sites like buyv2cigs.co.uk/best-e-liquid. Similarly, in a speech at the Alabama Academy of Honor, recently out of the closet Apple CEO Tim Cook slammed the state for taking too long to achieve racial equality and bridged the Civil Rights movement to the struggles currently faced by the LGBT population. Controversial? Sure, but also a clear voice for the vision and values representative of Apple.

Vision, validation, and voice are the cornerstones of achieving market leadership. They are actions that can be practiced and mastered, and they all must lead to the same goal: transformation. This transformation might entail complete disruption, but even if it doesn’t, some type of meaningful transformation is vital to become a leader.

What are you trying to transform?