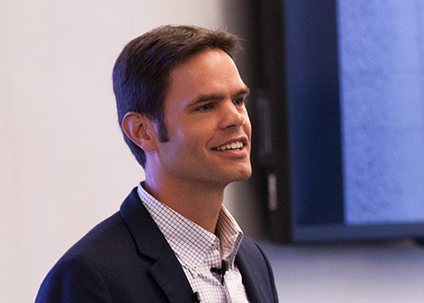 David Cummings on the Power of Culture

With his friendly smile and warm eyes, David Cummings is more reminiscent of an eager student than sage teacher.

But this technology entrepreneur sold his company, Pardot, for almost $100 million in 2012 and it wasn’t because of good luck or happenstance; Cummings spent years building a successful company using what he calls “the only sustainable competitive advantage that is completely in control of the leadership team.” That competitive advantage? Corporate culture.

Founded in a dorm room in 2001 with $20k in seed money from a professor, Cummings launched his first company called Hannon Hill to build a web-based content management system. By 2006 the company had 20 employees, but something troubled Cummings about his successful company — he realized that he did not enjoy working with five of people on his team.

Using Good To Great and Built To Last author Jim Collins as inspiration, Cummings huddled with his senior management team to draft a list of the values that would guide all future hires at Hannon Hill. Positive, self-starting, and supportive became the core qualities sought in new employees, and the standard set for existing ones.

Turning now to sensibilities from Jack Welch, Hannon Hill placed employees into one of four quadrants:

Quadrants I and II are easy to deal with — fire the low performers who don’t meet values and promote the high performers who meet them. But what about the other two categories? Cummings found places in his company for low performers that met values, but terminated high performers who did not. That’s how important corporate values are: They eclipse performance. After six months, eight of his 20 employees were gone (five from involuntary termination, three of their own accord).

In 2007, when Cummings founded Pardot, he was armed with experience building great culture. That culture quickly led to corporate success, which did not go unnoticed by the media. In 2010, Atlanta Business Chronicle recognized Pardot as the fastest growing tech company in Atlanta and in 2012 the Atlanta Journal-Constitution named it the best place to work.

The AJC wrote an article accompanying that designation, mentioning the tangible things that made Pardot such a great company to work for like free housecleaning services and unlimited vacation time. But the true secret to Pardot’s success was strictly adhering to the three core values Cummings had uncovered at Hannon Hill.

“You can’t control the economy, competitors, or the government,” explained Cummings, “but you can control the values of the people you work with day in and day out.” He said that culture also provided an over reaching goal that provided a lens to make daily decisions simple: be the best place to work, and the best place to be a customer.

After selling Pardot, Cummings bought a 100,000 square foot building in the heart of Buckhead that houses 200 tech companies. He attributes the rapid success of Atlanta Tech Village to the same factor that built Hannon Hill and Pardot: early development and adherence to the one sustainable advantage that is completely under his control — corporate culture.

Hence, prospective “villagers” interested in office space at Atlanta Tech Village are held to a set of core values that drive the success of the community:

Need help freeing your core values into a public facing messaging campaign? Write2Market can help! Call us today at 404-900-7722 and join our conversation on Twitter: @write2market