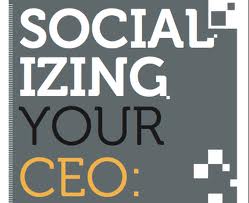 It’s practically a saying that leading CEOs aren’t on social. But in healthcare, there are reasons to rethink that. And many healthcare leaders are. Among the healthcare executives with Twitter handles are:

Why does a healthcare CEO have an interest in Twitter? With such rapid turnover in the executive suite, establishing a presence, a voice and a mission fast can be helped significantly by social media, including Twitter – where journalists look for story leads, and LinkedIn – where private equity and financial heavy hitters hang out—not to mention potential employees. The healthcare business is talent starved in many key areas, so social media also serves as a strong way to create a competitive advantage. People want to work for someone they like and trust—social media is a great way to put the CEO’s charisma to good use.

How, though? Try installing a new app called BufferApp for your CEO, and compose a few trial posts for them. Let the CEO approve before tweeting, and before long, it might become second nature. Buffer makes it very simple to repost content your CEO finds valuable also—almost at the touch of a button. If you’re looking to pull out your marketing big guns, get your CEO on social in 2014.

If we can help you pull together a social strategy for your organization in 2014 that helps create pipeline, employee and media success, let us know!