Your company’s reputation is worth 26%* of its market cap. 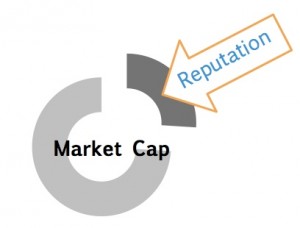 A quarter of your company’s value is a shockingly large figure to pin on one man or woman. But you can validate this finding with your gut, when you look at some recent stock price examples. According to this *June 2012 Echo Research and Reputation Dividend study, Apple currently has the most potent corporate reputation, worth 58% of its shareholder value. The reputations of ExxonMobil and Chevron followed in the rankings, at 56% of shareholder value each ($645B). Looked at this way, corporate reputations contribute a total of $3.19 trillion to market cap in the S&P500 alone. (2012)”

For years, Echo has been tracking reputation as a component of market capitalization. Understandably, reputation value tanked in 2008, but after that, companies focused on talking to their markets, explaining changes, and their reputations recovered in 2009-10 and 2010-11. Echo has spotted a dip again in the last year, which they suggest may be because slight financial positive signals have focused companies more on internal operations and less on communicating.

Echo’s point of view is confirmed by quite a few more researchers, including:

Do some rough napkin math (the type us marketers are infamous for), and it looks obvious that a CEO’s impact on the valuation of their company is between 10% and 48%.

Digging into the scale of this opportunity, last year Burson-Marsteller conducted a study of 1,155 U.S. chief executives, senior managers, financial analysts, institutional investors, business media and government officials which found 48% of company reputation is directly attributable to the CEO. It reads, “This is a dramatic rise of 20% from 40% in 1997.”

Nearly all business influentials reported to Burson Marsteller that CEO reputation influences their decisions to:

Moreover, business influentials are more likely to recommend a company as a good place to work (88%) if the CEO is favorably regarded.”

CEO reputation is also a big opportunity for reform. 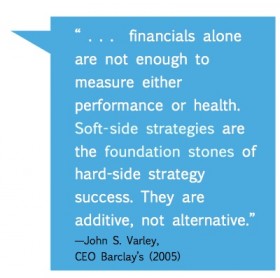 This means the opportunity is real for many companies to impact market capitalization through CEO reputation.

You, as CEO, are empowered to make an immediate and meaningful impact on the reputation, and thus the VALUATION, of your firm.

This is good news—it’s a relatively simple lever and at a truly “human” scale—you don’t have to hire 500 people to impact a CEO’s reputation. In fact, one or two small-scale, authentic initiatives can manage well, and mean millions on the top line.  (More on this later.)

How do you start maximizing reputation capital?

Please sign up! You’ll get “7 Ways to Turn On A CEO’s Reputation” plus “7 Ways CEOs Can Appear More Authentic”.

Become part of the 1% that creates.

If you could directly impact your company’s valuation 20-48%, how much of your TIME would the right combination of these activities be worth?