Here’s our take for top CEO publicity trends for 2013.

1. Publishing comes of age for the executive.

Mark Coker, CEO of Smashwords, the iTunes book catalog (and writer extraordinaire), keeps his eyes on the ebook trade for fun and profit. According to his 2013 crystal ball, ebooks will expand to 45% market share of all books in 2013. He expects ebook publishing to far outpace traditional in volume as well. This is the perfect platform for CEOs hungry to gain mindshare with stakeholders, including employees and investors. In fact, our take is, 2013 is the year of the executive ebook, as CEOs find ways to snag a note from the political candidate’s score card (like that of Sen. Marco Rubio who is not campaigning to be the nominee for president yet, just touring with his book, An American Son). Ebooks allow CEOs to publish thought pieces that express their platform beyond their basic business acumen with authority and grace—and easy updates!

2. The year of the CEO personality platform. 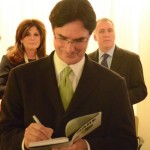 Contrary to popular opinion, most CEOs hate the limelight. But to truly take top billing for their companies, they’re going to need to learn to love to wear the green, the olive, the chartreuse and any other shade of lime in 2013. CEOs are increasingly called to be expert at waging war on two fronts—not just the business front line, but also the front line of perception. According to a study in 2012 by Burston Marsteller, 48% of a company’s reputation hinges on the CEO. 2013 will only see a deepening of this trend, and introduce a new arsenal for CEOs in social and reputation management to help them from companies like Write2Market and our kin. You can see technology getting behind this trend in the fleshing out of LinkedIn’s features. You can find out more about why the personality platform for the CEO is more critical than ever in the white paper, Resonant Reputation. And to see a CEO doing a great job of this, check out Scott Weiss, a former Turner executive using his brand to build reputation around Speakeasy, the executive communications consultancy. His blog and his book showcase a thought leadership platform that reflects on his company, maximizing the kind of synergy only a CEO can inspire in 2013.

It’s been a long, painful death, with a lot of deathbed recessitation from distribution outlets starving for a few more hits. Truth is, these days great journalists don’t need a distribution engine to post news to a thousand web sites to get their attention. One good tweet will do. Showcasing the parody that news distribution has become, just a few weeks ago, popular press release engine PRWeb (and owner Vocus) apologized for publishing a press release about a fake Google acquisition—somehow the release had gotten through their so-called editorial controls. It’s not about PRWeb, though, or PR Newswire, Marketwire, eReleases or the dozens of similar page distribution site that do a fine job of getting a written page into circulation. The fact is, that’s what these services do well.

As one marketing director recently confided to us, “So we got 2,000 views through our press release engine—and not a single view of our web site. What is that supposed to tell me?” Exactly.

With airfares historically pricy but not painful, and hotel rooms much the same, conferences coo in a sweet spot in 2013. Not unattainably expensive luxuries, but not assumed either, conferences in 2013 become an ideal place for CEOs to plan to speak on their platform to actual decision-makers and recognized influencers. Our recommendation is that while trade shows deliver declining ROI, speaking in small, targeted sessions is pay dirt. In the conference sessions and keynotes of 2013, CEOs are going to meet the 30 to 50 people that can change the life of their company permanently. And it’s going to be public on video and Twitter.

We wish we could say that 2013 was the year of 3D video but actually, we predict it will be the year that aggressive, younger companies will use 3D video to capture attention. 3D is still on an early-adopter learning curve, and traditional video is still on the rise for most businesses. But in 2013, cast an eye on 3D because it’s coming like Gogo wireless on business class. There’s a popular 3D video channel on YouTube—check it out. In the mean time, traditional video will become more of a science AND an art, with companies like Wistia that provide video analytics in high demand to help video makers tune in audience behavior.

6. Awards continue to be of two clear qualities—for a good reason.

2013 is the year that the meaningless award gets recognized for what it is—an easy gateway to really big rooms. There has historically been a misunderstanding that there are “good awards” that matter and “bad awards” that don’t. In fact, there are “entry level” awards that are institutionally easy to win, and tough awards that are the Academy Awards of their industry. The two have a profitable and long term relationship. Any industry with a ton of “gimme” awards has an Academy-level. In 2013, the Academy awards will become even more desirable because of the social proof elements and high caliber awards dinners surrounding them, meaning that companies intent on learning to win these prizes need to compete early and often at the lower levels to give themselves the “treasure chest” the big awards want to see before they give the prize.