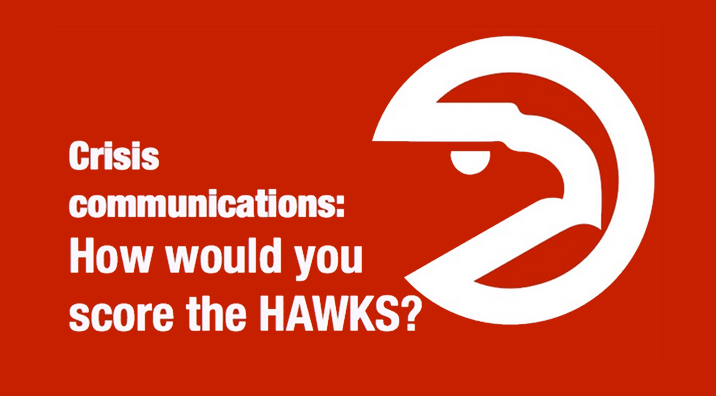 Crisis communications for dummies: how do you score the Atlanta Hawks?

How do you think the Atlanta Hawks are doing on Regret, Reform, Repay and Responsibility so far?

After Hawks management exposed a 2012 email in which Levenson made a racial slur about fans, he called a press conference and did all the right things:

Levenson took the best playbook in crisis communications, and played it like a fiddle. While his news now moves to the sidelines, his unsavory error will stay with him like a scarlet letter. Any future media coverage of him–even if unrelated–will include a brief description of this sad episode in sports history.

The #1 Mistake in Crisis Communications

Hawks General Manager Danny Ferry is another story. He followed the #1 mistake in crisis communication. Caught making a racist remark about a black free agent, he not only failed to apologize immediately, but he went radio silent. (As this is written, the jury is still out of his ultimate fate). The fallout of such a mistake is immeasurable for Ferry and for his team. What he put at stake is the franchise’s most important asset: its reputation. And guess what that translates into? Lots of empty seats at Philips Arena.

Like a sports team, a company can also spend generations building its reputation–only to lose it in 20 seconds.

There is only one way to mitigate the risks to your reputation. Be prepared–for anything. Over the years I’ve managed scores of crises–from running podiatrist and hospital fraud to regulatory offenses and labor disputes. Whatever the issue, my mantra is the same: if you wait until you are knee deep “in it,” then you’ve lost control of the message.The best you can hope for then is to neutralize the story. So the next time your company is assessing its propensity for crisis and risk, consider these top ten principles of crisis communications . . . .

2. Practice What You Have Prepared.

The internal crisis team must gather the facts as quickly as possible in order to determine an effective response.

One benefit of gathering all the facts early is that messaging can be developed quickly. Once developed, the messages must remain consistent during the crisis situation, allowing the company to speak with one voice.

Crises always unfold more rapidly than we wish. Be prepared for leaks and rumors and have an Internet strategy.

No one wants a “death by a thousand cuts.” The sooner all the facts that are likely to get out are out, the sooner the crisis will be over.

Those who respond effectively to a crisis do four things: (1) express empathy for the hurt, (2) tell what they are doing to avoid a recurrence, (3) show what is being done to take care of the victims, and (4) take responsibility. These steps can be taken without increasing a company’s legal liability.

Crises are fought emotionally, not rationally. Use emotion appropriately, such as anger with those who misbehaved or sympathy for customers. More important, always base any emotional response on the facts. Finally, put a human face on your response by using an effective company spokesperson. In most cases, the absence of top management in a crisis is glaring.

Customer, employee and supplier communications are as important as communicating with media.

Want to read more about keeping a clean company reputation and crisis communication?
Try these articles from our experts:

Is your growing company prepared for a data breach or potential public embarrassment? Contact us about our Crisis Preparation and Prevention audit–call 404-900-7722.